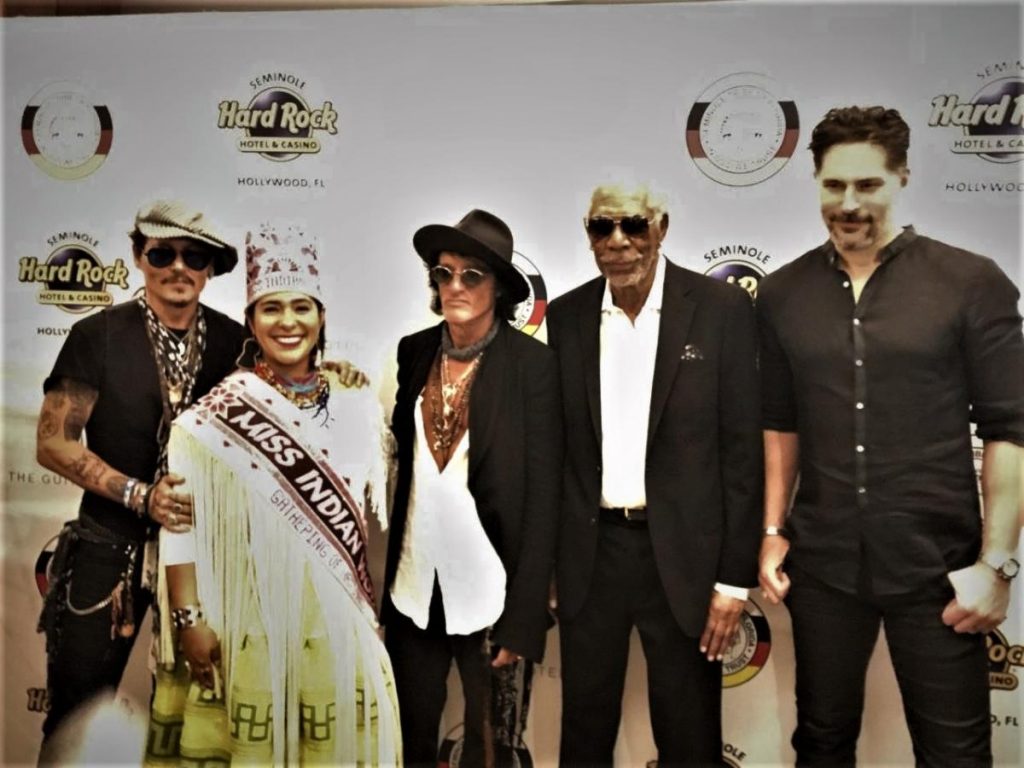 It was such an INCREDIBLE opening! So, a little backstory for those who may not know about “the guitar.” About three years ago, the announcement of the expansion for the HardRock in Hollywood was made. It would be the very first and only hotel in the world shaped like a guitar and it was going to be located on my home reservation in Hollywood, FL. The hotel would have new restaurants, clubs, shops, and a pool with over 20 cabanas! From my very own backyard, I watched the guitar slowly grow taller and taller. This grand opening was set to be like no other. I arrived in my shiniest dress, feeling extra proud that evening. I walked the blue carpet, enjoyed fancy finger foods, and made my way around the extravagant pool side. There were fire dancers, mermaids, synchronized swimmers, and a great band filling the air with music. With our all access passes we were able to join in on the party before the guitar smashing. My dad took so many pictures my phone died half way through the party!! We enjoyed the last moments before we filed onto the stage over the pool alongside celebrities like Big Kenny, Joe Manganiello, Morgan Freeman, Bella Thorne, Johnny Depp, Jesse McCartney, and Miguel. Our official’s spoke of how proud they were of this hotel and the milestones our tribe has made with the blessings of the Creator. Counting down from ten we lifted our guitars high and brought them down faster than the adrenaline pumping through our bodies. Fireworks, loud cheers, and music took over the moment. The guitar lit up with a show and everyone watched, some with tears in their eyes. It was such a special moment. I was proud. I’m appreciative of our Chairman, Marcellus Osceola Jr. for allowing me to be apart of this celebration.

Just a little history:  At 5 o’clock on the afternoon of December 14, 1979 the first high-stakes bingo hall in the country opened. Promised payouts of $2,000 caught the eyes of local and state authorities and the regulations of Indian gaming in Florida began. It has been a long journey of legal battles and creating relationships with our state, but starting from just cigarette shops and alligator wrestling, my tribe has become one of the most successful in the international casino gaming industry. Long before Hard Rock went hand in hand with the Seminoles, the casino “boom” in Indian Country began with just that one bingo hall we fought to keep open on the then Dania reservation. In 2006, my tribe acquired the Hard Rock International brand. It was one of the largest purchases ever made by an American Indian tribe. Thirteen years ago I was only 10 years old, but I still remember the announcement. Our powwow grounds and head start, which was only three trailers lined up, would become a brand new Hard Rock Hotel and Casino. At 10 years you don’t realize what that means for your community. I saw how excited my community was, I saw how happy my parents were to be working on this giant project, and I heard of the many changes that were going to be happening. I am 23 years old now, I’ve watched the many accomplishments of our tribe and I’ve watched my tribe’s success grow as I’ve grown. Just in the month of October, we had the reveal of the $700 million expansion on Tampa Hard Rock, the grand opening of the one and only guitar hotel and expansion of Hollywood Hard Rock, and the grand opening of $440 million Sacramento Hard Rock in partnership with Estom Yumeka Maidu of the Enterprise Rancheria. We are a proud tribe and we will continue to keep setting the bar higher and higher